Parent Rips School Board Chair’s Hypocrisy, Chair Tries Removing Her Then Storms Out

Don’t look now, but it appears that those fighting to keep student mask mandates in place are coming unglued.

Case in point: During Tuesday’s Montgomery County (Virginia) School Board meeting, parent Alecia Vaught ripped board members for double standards — and much more.

“We sat here last year and listened to you guys preach to us about [former] Gov. [Ralph] Northam’s executive orders [on masks in schools] and how we must follow them,” she said at the microphone. “You guys remember that? We do.”

Vaught added, “So here’s the [new] governor [Glenn Youngkin] that comes into office. But yet you don’t want to follow his orders [to make masks optional in schools]. Why is that? Why is it different from the last year … to this year? Two different governors, two different political parties. So, we were supposed to follow it last year, but not this year. That makes no sense and makes all of you a bunch of hypocrites.”

Oh, but it got much better.

Vaught then turned her attention to board Chair Sue Kass and pointed to photos on her cellphone of Kass maskless “with a crowd of people.” 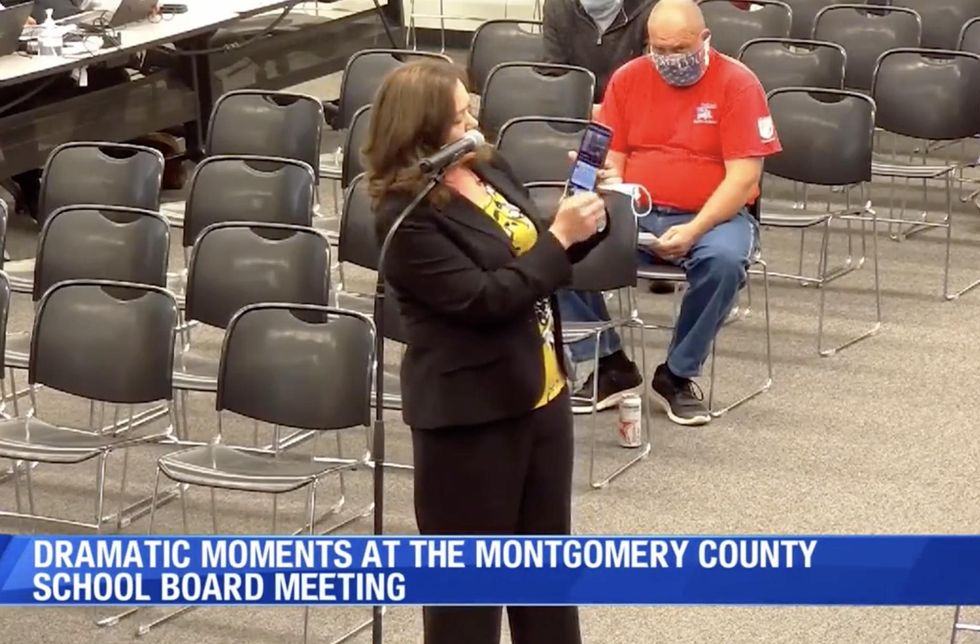 With that, Kass exploded like an assistant principal yelling at a student and told Vaught “you are done” and soon asked a police officer to kick her out.

When that didn’t work, Kass slammed her laptop closed and stormed out of the meeting.

And as Kass walked past a Vaught, she told the board chair “we’re coming for your seat.”

Following the heated confrontation, Vaught and Kass spoke separately to WXFR-TV about the issues at hand.

First off, Vaught told the station that she and The Second Monday Constitution Group — of which she is the founder — sat in the front row of the room during the previous school board meeting and took off their masks in protest. That reportedly elicited yelling from Kass, WXFR said.

For her part, Kass told the station she’s been receiving mean emails and phone calls regarding her position on the school board.

“I am not right-wing. I am trying to do the right thing,” Vaught added to the station. “I am doing the right thing for our kids, and I’m standing up and calling out hypocrisy when there is hypocrisy because we are all tired of it — it’s rules for thee and not for me.”

But Kass told WXFR it’s about respect: “She used a forum that is supposed to be for a community to express their concerns about the school, students, and staff, and she used that forum for her political purposes.”

Vaught stuck to her guns, saying the board members “need to listen to the parents. We are the parents, we dictate how they grow up, how they get educated, and we pay the taxes for those schools to get built. We pay these salaries, we elect these board members onto the boards,” the station said.

Source: https://www.theblaze.com/news/video-parent-rips-school-board-chairs-mask-hypocrisy-with-visual-proof-and-irate-chair-asks-cop-to-remove-her-when-that-fails
Pandemic 101: It Really Is the Same Story Happening Again – Here’s The Ending The CDC Isn’t Publishing Large Portions of the COVID Data It Collects