A formerly healthy 43-year-old father from Langley, B.C.  — who is in hospital recovering from complications following a rare blood clot — is warning others to watch for signs of trouble after receiving an AstraZeneca-Oxford COVID-19 vaccine.

Shaun Mulldoon and his wife Tara say that doctors confirmed to them that he’s a victim of the unusual but dangerous syndrome linked to the AstraZeneca vaccine. The clot in his abdomen will leave him with life-long effects after two metres of his small intestine was removed.

Health officials said Thursday that a man in his 40s in the Fraser Health region is one of the two British Columbians known to be affected by the syndrome, but health authorities will not comment on individual cases.

Shaun Mulldoon believes he wasn’t adequately warned of the vaccine’s risks or protected from them. 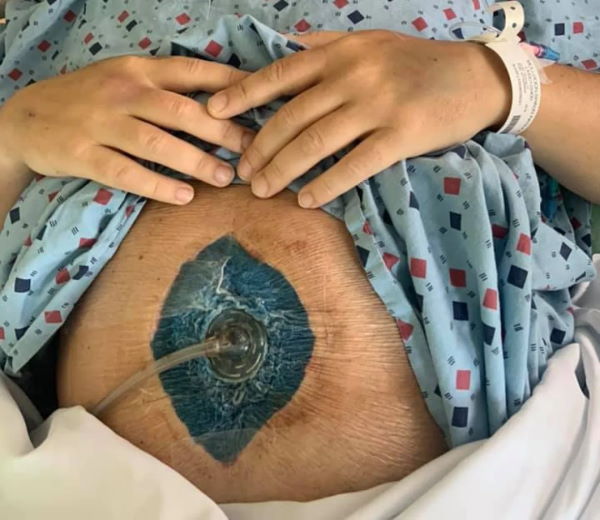 Speaking on her husband’s behalf, Tara Mulldoon said they are not telling people to avoid AstraZeneca, just be informed and seek help promptly if they develop any health problems afterwards.

“This is life changing for us,” she said. “I feel like we have a long road ahead of us as far as his recovery goes. He’s lost half of his small intestine.”

Her husband was vaccinated on April 22 and ended up in emergency surgery on May 9. She said that he initially felt nauseous but symptoms progressed to fever, headache and vomiting. Each time he felt ill he called his doctor or the HealthLinkBC line at 811 and was advised to stay home — even after going in to have a test for COVID-19 — which turned out to be negative.

He finally went to emergency on May 8 after he began to vomit and pass blood.

Mulldoon posted on social media that he wished he’d had more insight into the “worse case scenario.”

“Seventeen days after my vaccine [I] ended up going into emergency surgery to remove over six feet of my small intestine. I had a massive blood clot. Second surgery two days later to remove more. My surgeon told me it was very close.”

Tara Mulldoon said the ordeal has been difficult for the family which includes two school-aged children.

“We are not anti-vaxxers. We just want people to take any adverse symptoms following the vaccine — please take it seriously,” she said.

“I mean there’s chitter chatter about the risks of blood clots, but … it was presented to us as being so so rare,” said Mulldoon.

The National Advisory Committee on Immunization (NACI) says while the estimated risk of VITT is evolving — and varies from country to country — the rate in Canada at the end of April is about one per 100,000 persons vaccinated with the AstraZeneca vaccine.

B.C. followed Alberta and Ontario’s lead and paused the use of AstraZeneca-Oxford COVID-19 vaccine for first doses on May 12.

Some experts say the VITT syndrome has not been well described to the public.

This is no “run of the mill venous blood clot” in the leg after a long flight, according to Dr. David Fisman, a University of Toronto professor, epidemiologist and an infectious disease specialist with Ontario’s COVID-19 Science Advisory Table.

Fisman said in rare cases, the vaccine activates clotting cells and can cause a syndrome that’s difficult to treat.

“It’s a very serious thing. Once you have antibodies to your platelets, they clump together. That can lead to very severe plugging of some of our important blood vessels. Yes, very challenging, very serious. It seems, though, that you’re more likely to develop it the first time you’re exposed to the vaccine,” Henry said this week. “We’re watching very carefully.”

Fisman believes that Canada may have initially missed signals about the rate of risk as AstraZeneca initially was given to older people so strokes caused by the vaccine may have gone undetected.

Yes, An Employer Can Legally Require Vaccination, With Exceptions Harvard Epidemiologist Locked Out From Twitter Account After Criticizing Masks