You will recall that Pastor Artur Pawlowski famously kicked out the Calgary Police who crashed his Easter service in 2021 when they received reports of non-compliance of COVID-19 restrictions and wanted to inspect his church.

For violation of the court orders from Justice Gates (the Gates Order on April 23, 2021) and Associate Chief Justice J. Rooke (the Rooke Order on May 6, 2021), Justice Adam Germain has imposed the following penalties on Pastor Artur Pawlowski:

That’s right, he needs provide the community services that he has been doing for many years, but he must do an additional 120 hours over and above that which he already does (outside of his street ministry); apparently he hasn’t done enough for the community.

The judge declined the request of the prosecutors to make him serve 21 more days behind bars. In his order the judge said that he didn’t want to make him into a martyr, which would further his cause.

Here is the exact verbiage that Pastor Pawlowski must recite to undo everything he preached:

“I am also aware that the views I am expressing to you on this occasion may not be views held by the majority of medical experts in Alberta. While I may disagree with them, I am obliged to inform you that the majority of medical experts favour social distancing, mask wearing, and avoiding large crowds to reduce the spread of COVID-19. Most medical experts also support participation in a vaccination program unless for a valid religious or medical reason you cannot be vaccinated. Vaccinations have been shown statistically to save lives and to reduce the severity of COVID-19 symptoms.”

I suppose he could preach up a storm and say anything he wants, and then at the end he could play a pre-recorded message with this silly disclaimer.  It would be like posting a medical warning on a pack of cigarettes that every smoker just ignores.  Or maybe it would be more like listening to a radio commercial that is advertising cars and then has a fast-talking disclaimer at the end which is barely comprehendible.  I wonder if he would end up in the slammer again for doing that instead.  There is nothing in the order that would preclude the fast-talking recording.

Read if for yourself: “The final term of his probation order will be that when he is exercising his right of free speech and speaking against AHS Health Orders and AHS health recommendations, in a public gathering or public forum (including electronic social media); he must indicate in his communications the following ….”

The judge had the temerity to add, “when he is exercising his right of free speech …” in the order. Most people would argue that since he must speak a specific, government-directed message, this is not free speech at all.

In his 40-minute tirade, the judge repeatedly criticized Pastor Pawlowski for talking about civil liberties to the media. He specifically mentioned Pastor Artur’s appearance on Fox News. “After Pastor Artur Pawlowski was found guilty of contempt he went on a speaking tour of the United States where he parlayed his title as pastor and the fact he had been arrested for holding a church service into a rallying cry to attract like-minded individuals in the United States who also oppose reasonable health measures,” said Germain.  “It is disappointing that Pastor Pawlowski had to air his grievances about Alberta in another country. Leaders and statesmen don’t do that.” (Editor’s note: Unless they are warning other countries to expect the same behavior unless they take action to stop it) 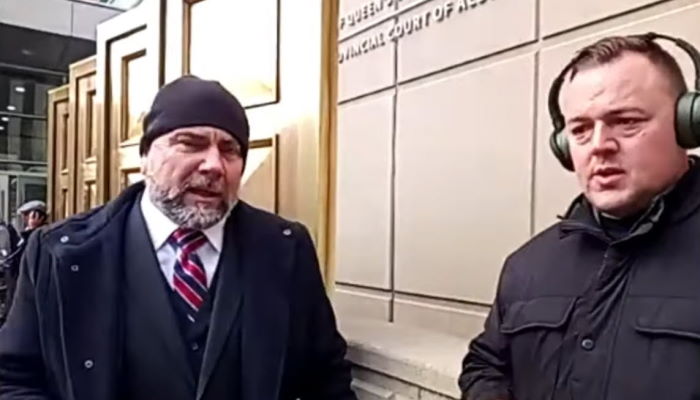 You can watch his attorney, Sarah Miller, discuss the judge’s decision.

There is a fund at SaveArtur.com dedicated to paying Pastor Artur’s legal fees.